Commemorating the Life and Journey of Johnny Lee Daniels 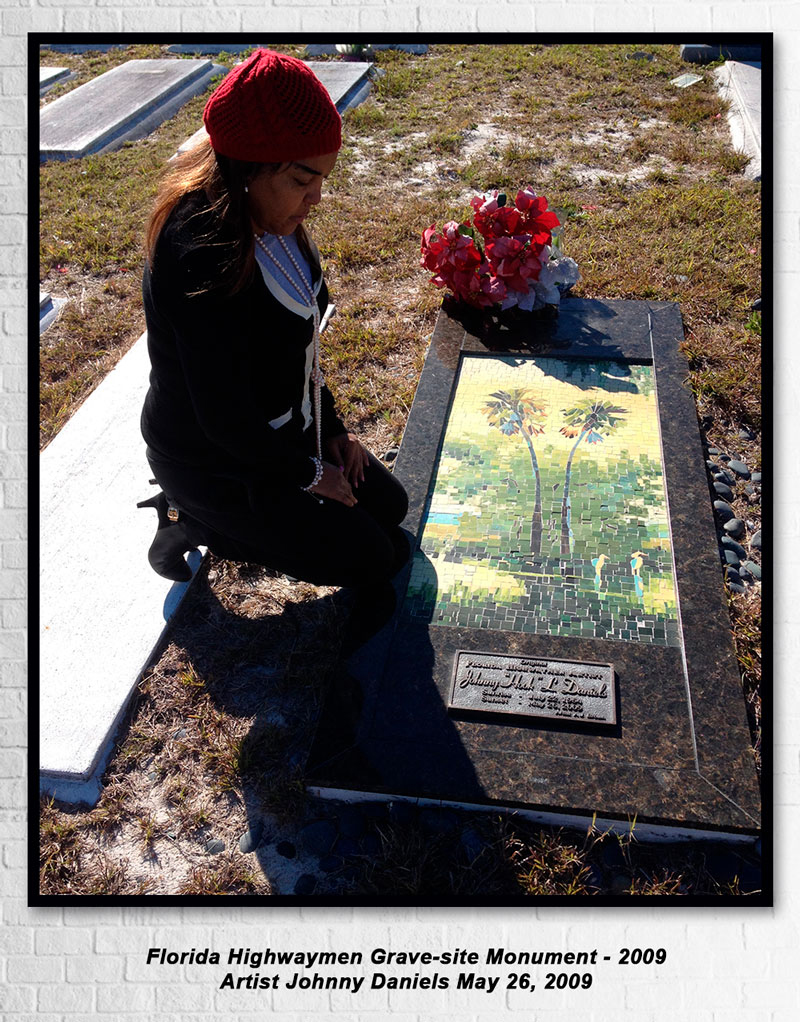 Johnny "Hook" Daniels was born July 22, 1954, in Quincy, Florida. He lived in the deep south of Fort Pierce, Florida, during the 1950s and '60s, a racially charged era of the Civil Rights Movement. A veteran painter of 40 years, Johnny initially made frames for the group; a short time later, he began his painting career as a young teen. Johnny was the youngest of the earliest core Florida Original Highwaymen. Johnny Daniels died on May 26, 2009. Daniels helped make Highwaymen Art the movement it is today.

In the mid-sixties, Johnny Daniels started his journey by making frames for the painters; but was not happy with his earnings. He soon began to paint by watching his older brother Willie Daniels. Whenever Willie took breaks, stepped away from his scenes, or wasn't looking, Johnny took the opportunity to practice his skills inside Willie's work. Johnny also enjoyed watching one of his friends Livingston Roberts create his masterpieces. Willie was not fond of his younger brother's habits; one day, Willie decided to take Johnny to the fields to pick oranges. He made enough money to buy his art supplies and never stopped painting!
Johnny earned his place in the world of art history. In 2004, Florida Original Highwaymen Johnny Daniels was inducted into the Florida Artist Hall of Fame.

Legend of the Road, during the early 1950s and '60s, the Civil Rights Movement was a racially charged era. Shunned for the color of their skin, museums and galleries would not showcase their work because they were black during the Jim Crow Days. So, they sold their work alongside US One and A1A. The trunks of their cars served as their office, and they displayed work that attracted locals and tourists. They used crown molding as frames and Upson board as a canvas. Tree trunks were used as easels since makeshift materials were the only supplies they could afford. On the road was a hard life; $ 25 or 35 dollars a painting, colorful, authentic Florida scenes sold, even when they were still wet!
The painters in the mid-'90s earned the name Highwaymen because they sold their paintings door to door and business to business, banks, and offices alike.
The African American group's impact was significant! Economically, socially, culturally, and geographically, and remain sustainable today.

Johnny Daniels was a pioneer, and his life was a historic teaching journey. Although no heirs wanted to paint, like the icons of his time, A.E. Backus, Harold Newton, and Alfred Hair, Johnny handed down his heritage to friends, family, blood, and non-blood.
He invested countless years in their careers; five Florida Historic Highwaymen Artists are members of the second generation, a significant extension of the Florida Original Highwaymen movement. The value he saw in their lives, valued his own, now transcends time.

A core member of the group, Johnny is known for his unique challenge and tremendous impact mentored five close
friends. Johnny Daniels honed the skills of Jimmy and Johnny Stovall, and Kelvin Hair over four years. They were able to sell their work at
much higher prices. Side by side, he mentored one female protege AJ Brown and last taught Richard Edwards. All are
America's Highwaymen Historic 2nd Generation. From meager means, Johnny was honored to own two galleries.
His humanitarian spirit reached above and beyond. Over time he ensured their accreditation, entitlement, and
success. Johnny Stovall and Kelvin Hair were his business partners in his first gallery; Johnny chose AJ Brown as his partner in his last gallery.

Family Memories: The sudden loss of my God uncle Johnny Daniels was another tragedy within the Highwaymen family. There was no clear understanding of how suggestive minor endoscopy surgery could end in death. I was there with Johnny daily during his hospital stay before he died. On the morning of his surgery, Johnny and I spoke by phone. According to his nurse, it was a surgery that should have taken about thirty minutes, and she would call me afterward. I waited for Johnny's nurse to call me back, but her call never came.

I lay on the sofa watching the clock in my art studio, wondering what was taking her so long. I called her but was unable to speak with her. The clock said 12:30 pm; I left the house to make the 1:00 pm Highwaymen meeting. I arrived and waited for the meeting to start. I received "the call," but it was from his niece Tate. In shock and disbelief, her words over the phone made my heart drop; the beating rhythm was fast. As I informed Kelvin of the news, who'd just walked in, it was hard to form the words in pain. From that moment on, the information traveled fast. I rushed to the hospital, and everyone followed. All the Highwaymen were there to see Johnny. Friends were in shock; the family was devastated. It was the end of another era and the loss of another Highwaymen legend. Johnny brought both generations together in more ways than one. Together, in a small room at the hospital, we all prayed and said goodbye. In the church, together, we mourned his passing at his funeral. For me, it was never the same without him. Johnny kept us all friendly with one another. Johnny was gone and is truly missed.

A History Maker! A sense of pride and respect Johnny Daniels has earned.
The self-taught entrepreneur was gifted with impeccable talent; his work sold for thousands and tens of thousands. His God-given talent is reflected in his love for God's nature in a lifetime of wildlife paintings. However, he never realized he'd bridge such a significant historical connection, the Originals, and the 2nd Generation.
Preservation of America's history through art education for future generations is essential, which Johnny understood. He is honored and remembered for his outstanding achievements and contributions.

Johnny Daniels is an American legend. He died May 26, 2009, at 54, in Fort Pierce, Florida. AJ Brown was honored when Ms. Jody Bonet of Cultural Affairs and Ms. Curley Daniels commissioned and authorized her to construct Daniel's grave-site monument. AJ Brown is the Goddaughter of Ms. Daniels, God family to the Daniels. As a part of Daniels's legacy, AJ Brown was named a legal representative and spokesperson for the Johnny Daniels art estate by his heirs.

History of the Highwaymen is a part of America's past-time. Their rightful place in the world
of art was reaffirmed when the United States of America, the first historic African American, Commander-in-Chief,
the 44th President Barack Obama held the highest office of the land, and First Lady Michelle Obama added two of
AJ Brown's paintings to their private White House collection. The president's collection also includes Johnny Daniels. 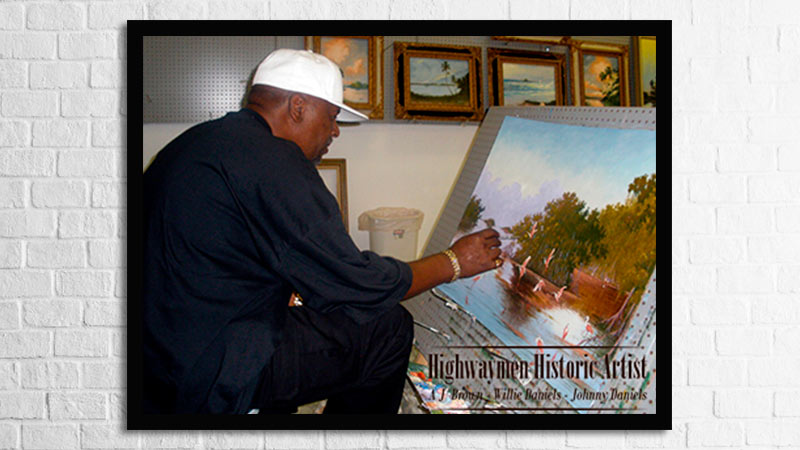 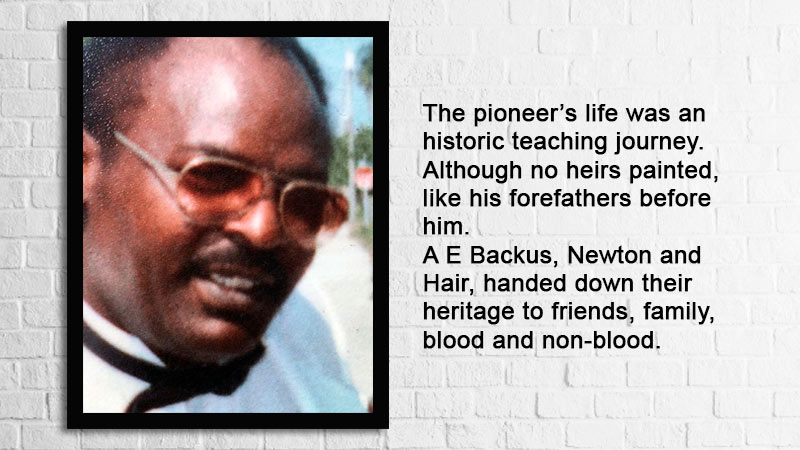 In 2009, Florida Highwaymen Historic Artist AJ Brown served as the first secretary for the Highwaymen group during the first official 501(c)3 organization. St. Lucie County Manager of Cultural Affairs Jody Bonet asked Brown if she would assist artist Stephanie Werner of Miami in familiarizing Werner with the African American group "the Florida Highwaymen." The $90.000 "Highwaymen Obelisk" project highlights one side of Brown's written history, which serves and celebrates the historic cultural landmark of the Highwaymen artists and Florida's history.

The 2009 Highwaymen Obelisk is a part of the new Highwaymen Heritage Trail constructed in 2012.

Brown's devoted contributions of over a month helped preserve the Highwaymen's story and culture, which helped secure Werner's vision as Brown provided the history of the written story text on the north side, which served well for the Obelisk.

During the on-site construction of the project, Brown was asked to donate her time to assist as a liaison to Mosaic Fabrications. The Johnny Daniels grave-site monument and the Obelisk are adorned with one of Daniel's paintings. Early Morning St Lucie River is a fitting inspiration constructed by Daniels's protege' AJ Brown.

Werner thanked Brown in a February 06, 2016, acknowledgment letter for Brown's collaboration efforts.
A monument of significance that stands for decades carries this unknown, unrecognized tribute by Florida Highwaymen Historic 2nd Generation Artist AJ Brown and is an honor! The 2009 Obelisk is a beautiful extension of the new Highwaymen Heritage Trail constructed in 2012. 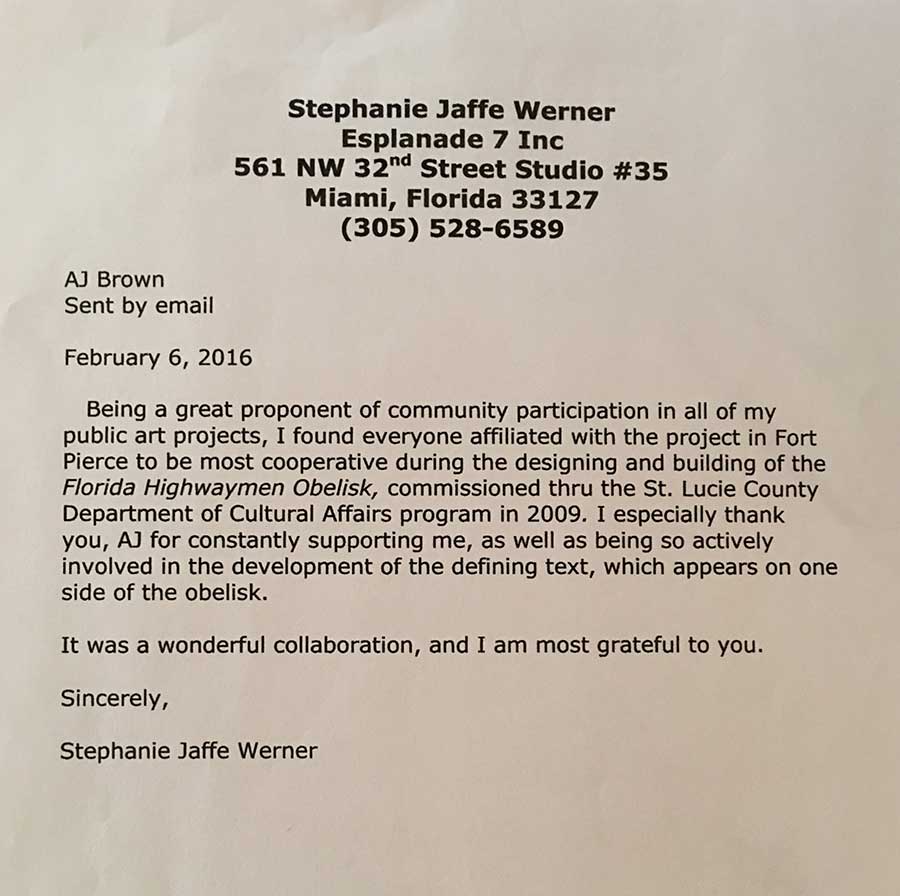 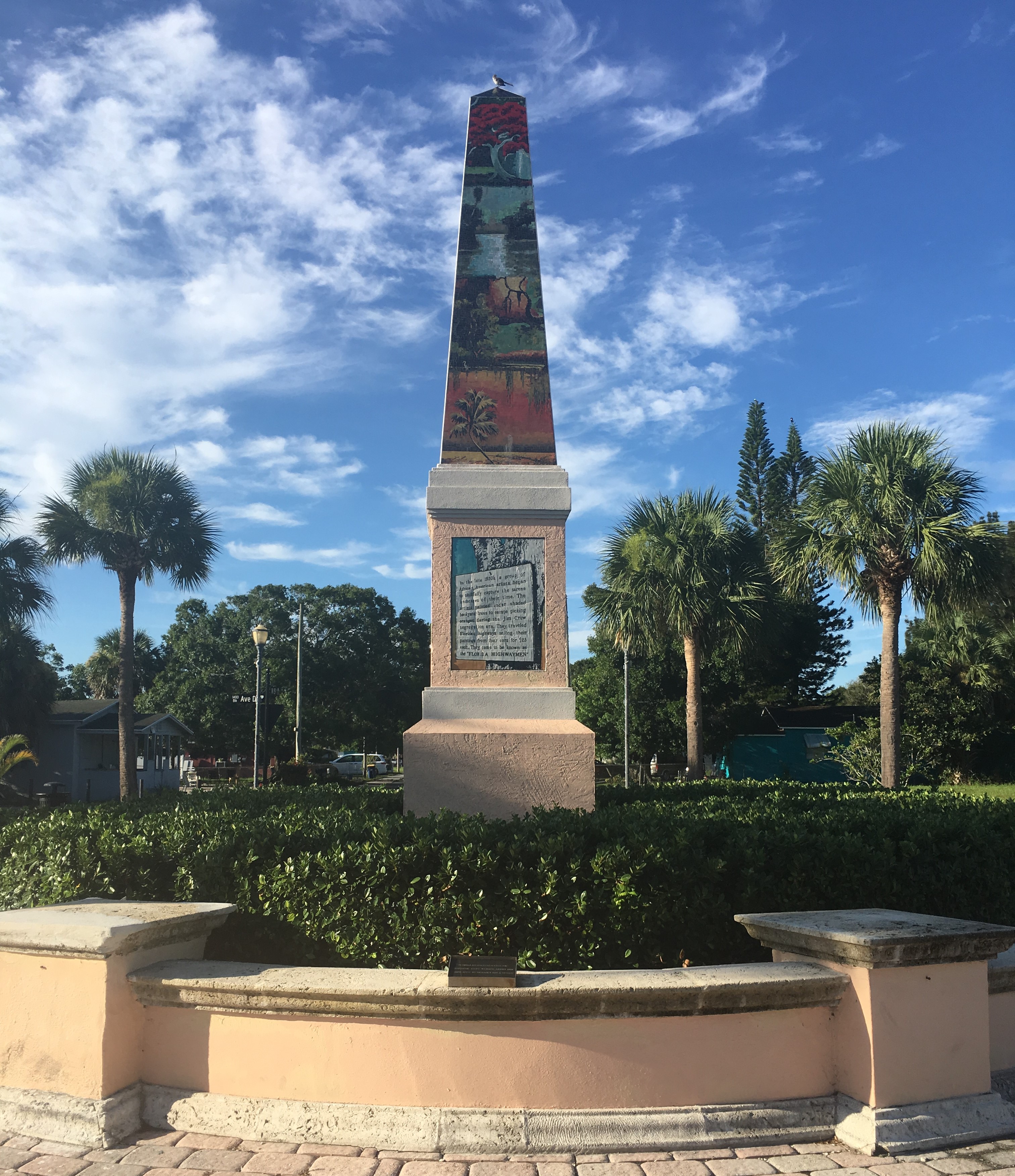 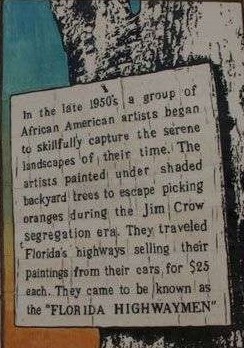