The story began well over fifty years ago; during the 1950s, a group of African American young men and one woman would decades later become known as the Florida Original Highwaymen.
During the era of segregation, art teacher Zanobia Jefferson of Fort Pierce, Florida, had a vision for her black art students.  She introduced her high school student Alfred Hair to a privileged white landscape artist named AE Backus.  Backus taught Hair to paint and influenced another young man named Harold Newton, an established artist.

It was the beginning of a historic movement no one could have foreseen.  Backus and Hair's unlikely friendship during segregation was forbidden when blacks and whites could not mix races.  Their vision influenced "friends and family, blood and non-blood" and grew into twenty-six Original Hall of Fame Highwaymen.  What started as a way out of poverty turned into a black history art movement that began during the Jim Crow era of the 1950s.

As history repeats itself, the "Second Generation Movement" was established in 1973 by Roy McLendon Jr. but can be traced back to the "Civil Rights Movement."
In the late 1960s, according to Jimmy Stovall and his beginnings.  The two legends are significant milestones for the Florida Highwaymen Historic 2nd Generation Artists.
Just as the Originals were collective friends, family, blood, and non-blood, the all African American 2nd generation group transcends the 1950s vision.  Instead, it continues Florida's art history as the "Florida Highwaymen Historic 2nd Generation Art Movement."

*Alfred Hair-forefather: known as one of the leaders, Hair died in 1970 at age 29.  In 2009 after forty years, Hair's widow Doretha Hair Truesdell occasionally attended board meetings.  In 2011, after retirement, Doretha and their son Roderick Hair joined the Highwaymen group as an artist.  Kelvin Hair also promotes Alfred Hair's legacy.  These members offer a significant history and represent Alfred Hair's legacy.  In September of 2011-2012, as a Highwaymen painter, Doretha toured Florida's art circuit with AJ Brown; Roderick Hair joined on occasion.  The author of the Highwaymen book, Legends of the Road, Gary Monroe, awarded Highwaymen artists AJ Brown and Doretha Hair at the Uptown Art Expo in Orlando, Florida.

*Harold Newton- forefather: was born in 1934, Newton died in 1994, his brothers Lemuel and Sam are originals, Sam does not refer to himself as a Highwaymen; his son Tracy Newton is a painter; none of these painters ever attended meetings.

Roy McLendon Sr.: born in 1932, the 89 years young legend McLendon Sr. holds the highest seniority among the group today; he briefly served as a 2009 board member and only during the first historical 501(c)3.  His son Roy McLendon Jr. established himself in 1973 and has historically painted for over 40 years; the above image of Roy Jr. is to respect and honor the legend who has earned his place in history.  His seniority marked the milestone of establishing the Florida Highwaymen Historic 2nd Generation in 1973.  Daughter Kay manages her father; his second son Ray McLendon is also a well-known Highwaymen artist.

*Livingston Roberts: born in Elkton, Florida, in 1941.  Roberts died in 2004; his daughter Diane Roberts painted but hiatus-ed after she married.  His sister Gertrude Walker was a member of the 1st By-Laws Committee; brother Francis Roberts and Nephew Francis Roberts Jr. hiatus-ed.

*James Gibson: 2009 board member Gibson was born in 1938 and died 8/15/17.  In 2005, James Gibson taught AJ Brown to paint and establish her status as a 2nd Generation Highwaymen artist.  Brown is the only female Gibson taught.  Brown sometimes refers to herself as Florida Highwaymen Historic Artist.

*Mary Ann Carroll: died December 4, 2019, at age 79; she was the sole female of the "Original Highwaymen" group and the first historic President of the first historical 501(c)3 organization.  From May 2009-to 2011, "the mandated allotted two years." Mary Ann Carroll unified and included all 2nd Generation Highwaymen artists and deligated several official offices to most of the 2nd gen's.

*Willie Daniels: Died early Sunday morning, September 19, 2021, at 71.  In support of female AJ Brown, Willie continued to paint with her.  Brown taught her granddaughter "Salsa" to paint; Willie began back porch lessons with Salsa when she was nine.
At age ten, with the teachings of Willie Daniels, Salsa became a member of the 4th Generation.  Willie Daniels has a legacy.

*Johnny Lee "Hook" Daniels: Johnny died Tuesday, 05/26/09; the legend established five members of the 2nd Generation.  Johnny taught and mentored four men and one female, AJ Brown, for over a decade to paint.  Jimmy Stovall was a by-laws committee member of the 1st historic 501c3.  His twin brother Johnny Stovall was a board member.  Kelvin Hair was appointed the 1st spokesman for the group.  Johnny and Kelvin were business partners of the first Johnny Daniels Highwaymen art gallery.  Kelvin's childhood friend Richard Edwards was a board member and the last to receive Daniel's teachings.  Female AJ Brown was appointed as the 1st secretary & by-laws committee member; Brown was the former business partner of the Johnny Daniels Highwaymen art gallery in Fort Pierce, Florida.

*Alfonso "Poncho" Moran: died in 2003, no attendance, no family paints

Al "Blood" Black: 2009 attended board member; 2011 elected vice president; in 2016 assumed the 3rd presidency, after the death of President Carnell Smith on 12/15/15; son, Marcus Oliver paints in 2011 off/on, no attendance.  Al Black was essential in establishing AJ Brown as a 2nd Generation member.

*Isaac Knight: 2009 board member, his wife Lilly is his manager., and was the 1st by-laws committee member; their son does not paint, brother-in-law to Al Black;
In 2014, Mr. Knight taught his granddaughter, Desiree Knight, to paint.

*Carnell "Pete" Smith: 2009 board member; his sister Doretha Hair Truesdell occasionally attended meetings.  In 2011, Smith was elected President of the second 501(c)3.  Smith extended the office's allotted period, and his sister Doretha Hair became secretary.  In 2011, Doretha, the retired teacher,
permanently returned to Fort Pierce after 40 years.  She joined the group and toured the art circuit with AJ Brown in September 2011/12.  Smith held office until he died on December 12, 2015.  No official voting elections were held after Smith's death.  In 2017, Doretha Hair, "not an Original Highwayman," assumed the position of President.  The By-laws were designated for members of the "Original Highwaymen" to hold the office of power for a "limited term of two years."  The second 501(c)3 was controversial, unethical, and exceeded the terms of the written by-laws in 2009.  Unlike the first 501(c)3 elected president, Mary Ann Carroll's office included all 2nd Generation members.  Still, for reasons unknown, the second 501c3 excluded members of the "Original Highwaymen, Hall of Fame Johnny Daniels 2nd Generation Artists."

*Charles Walker: 2009 board member, wife Gertrude managed her husband and served as a By-Laws Committee member.

*Robert Butler of Lakeland, Florida: attended meetings when possible; Mr. Butler owned multiple galleries and was initially an Okeechobee artist who did not paint as a Highwaymen; he died on 3/19/14: sons Robert Butler Jr., Daniel, David, Samuel, Timothy, Michael, and daughters: Dorene, Aletha, Angela are all artists.

R. L. Lewis, JR.: 2009 elected secretary but delegated his position to 2nd Generation member AJ Brown, she was appointed and authorized as the 1st official secretary; son Robert Lewis III, is his father's manager, both sons are 2nd generation members.

Norman Wright: 2009 board member; Wright has historically painted since 1974 and over decades struggled to build his legacy; as a former brother-in-law to Al Black, Wright is one of the Highwaymen who can still be found roadside painting; King's Highway south of Orange Avenue and US Highway One south of Orange Avenue; the above image of Wright is intended to respect and honor the legend who painted over the decades and has earned his place in history.

Jimmy Stovall: 2009 board member and by-laws committee.  According to Stovall, the prominent Florida Highwaymen artist began to paint in 1969; he hiatus-ed over the years, then renewed his interest during the late 1990s.  Stovall pursues an Original status distinguished from the 2nd Generation and refers to himself as an Original Highwayman.

Together we are our best,
Thank you, America, for treating all our generations as worthy! 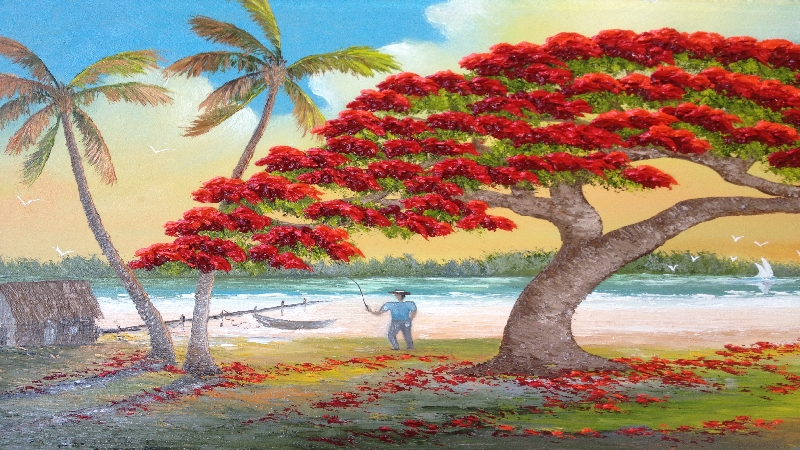 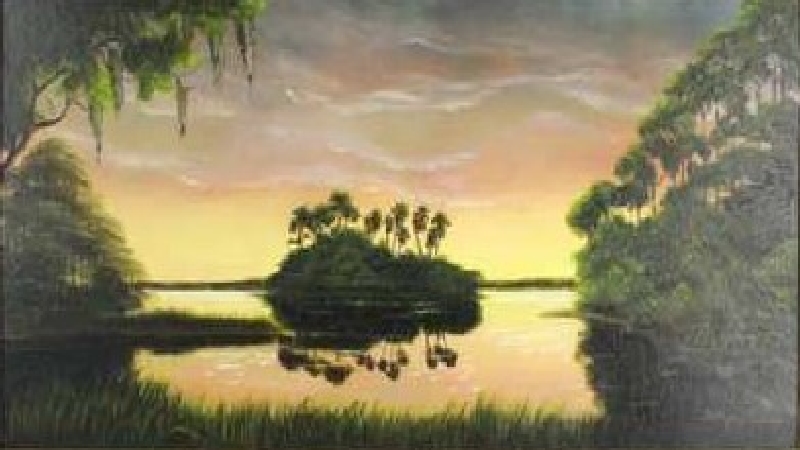 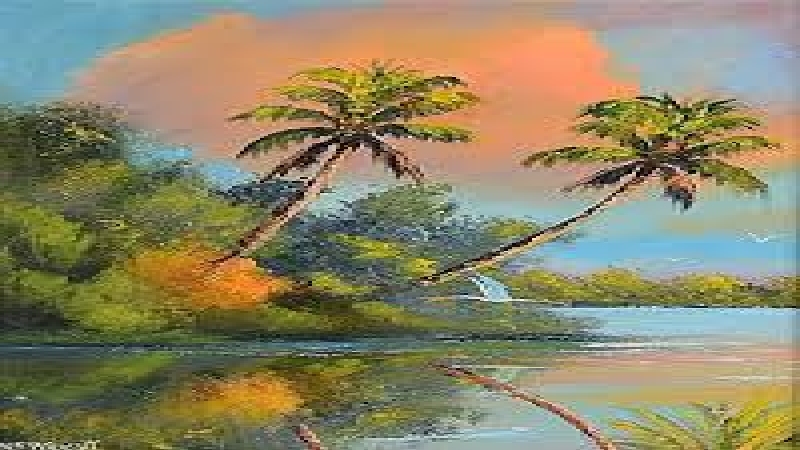 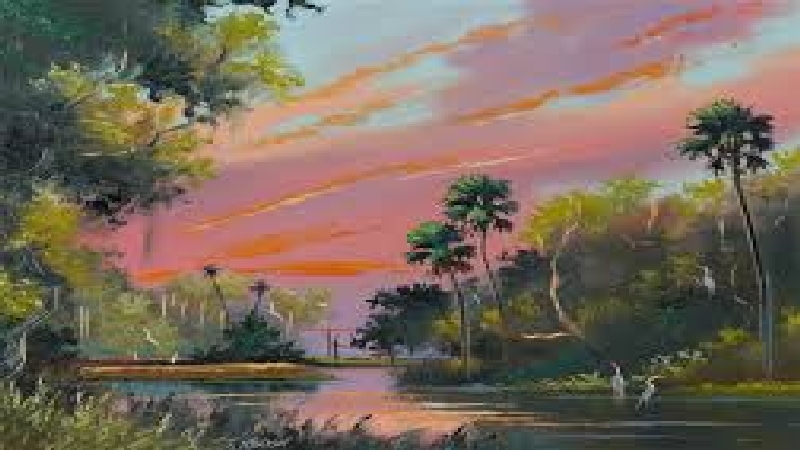 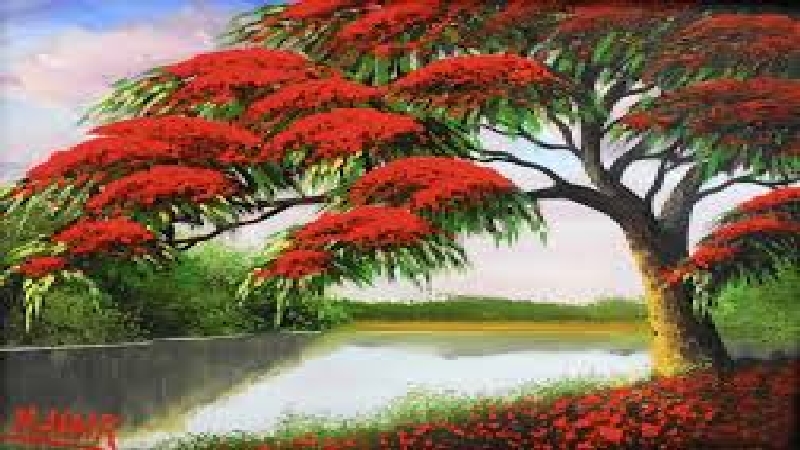 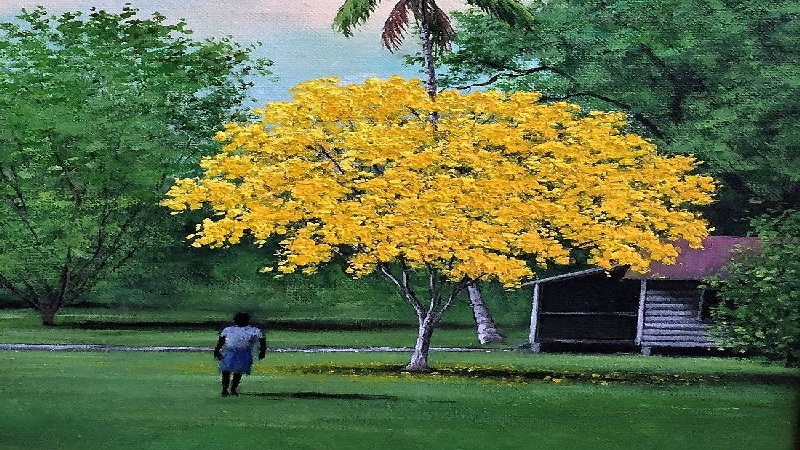 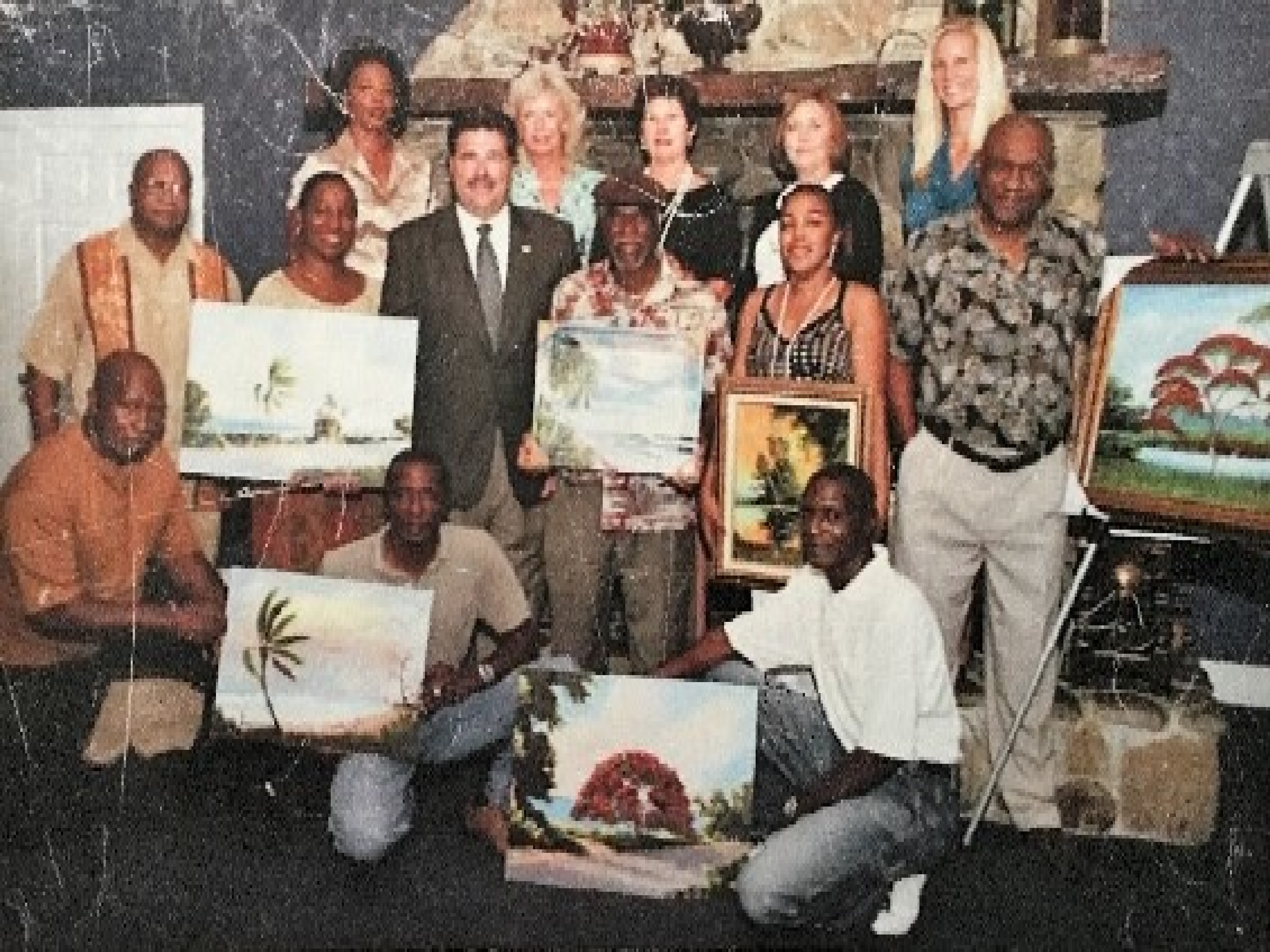 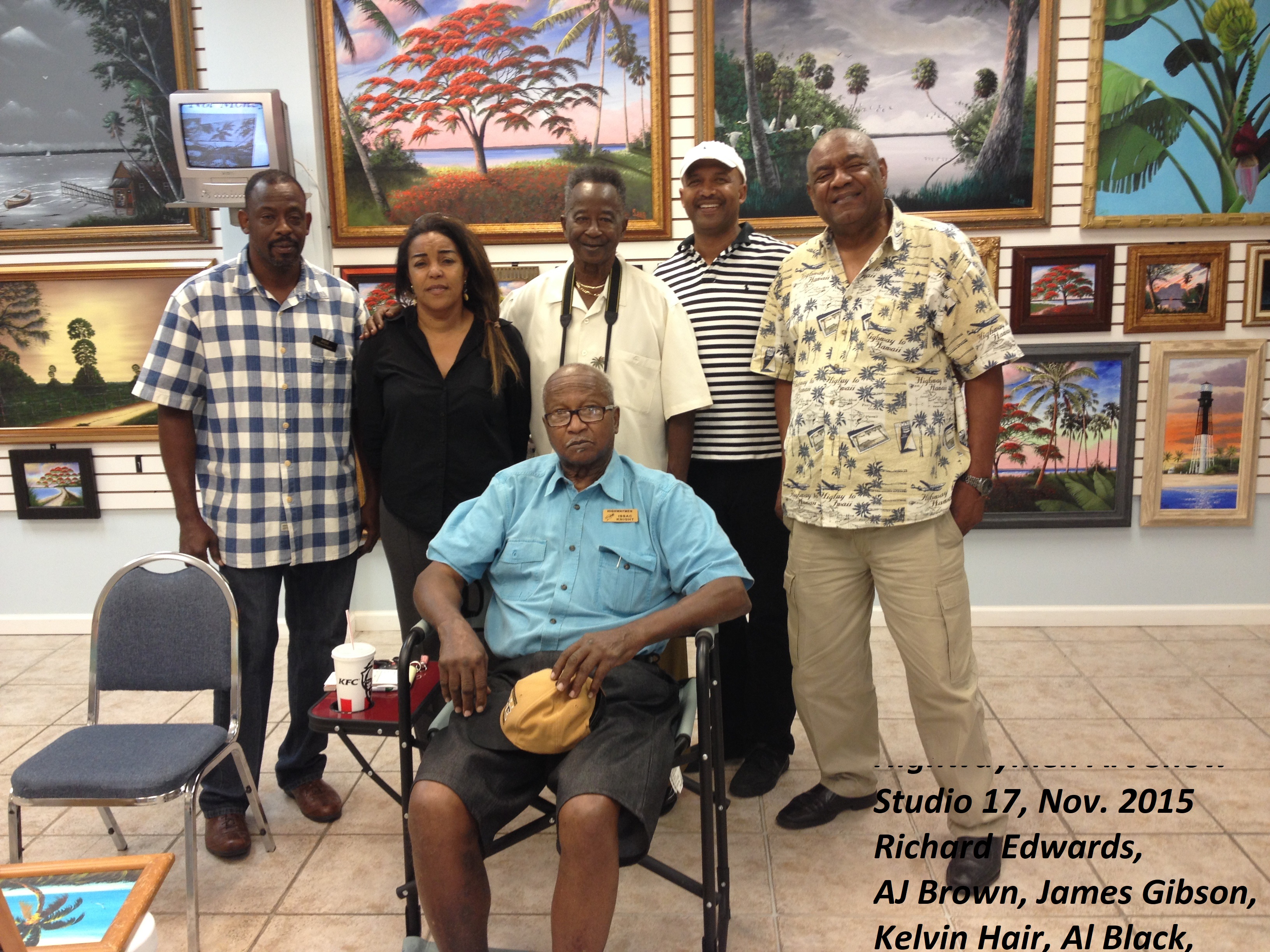 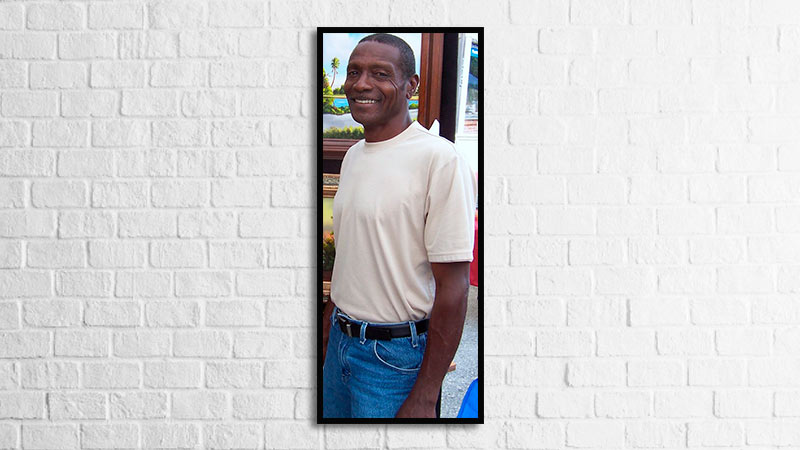 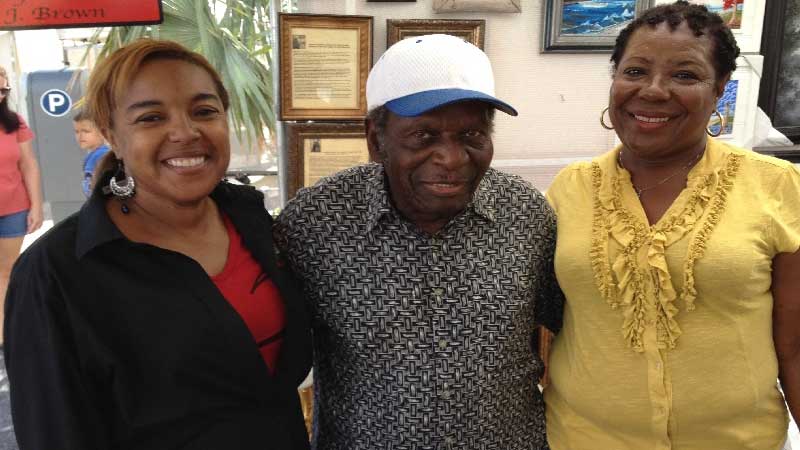 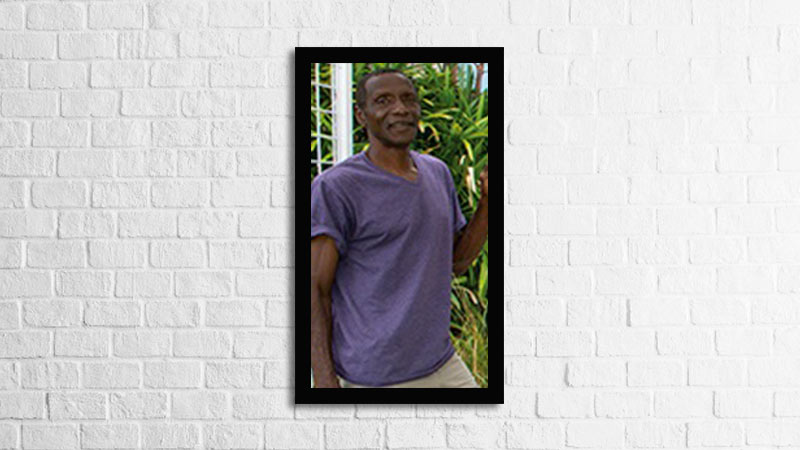 According to Jimmy Stovall he initially painted during the Civil Rights Era of the late 1960s, hiatus-ed and later renewed interest in 1999